We awoke this morning to the Fiordland Navigator's two "alarms". The engines starting at 6:20am and the anchor being brought up shortly thereafter. We quickly showered and headed up for breakfast. Baked beans is a breakfast staple here (as in Australia) and I've begun to enjoy them alongside my eggs. Still not a fan of Vegemite or Marmite, though. 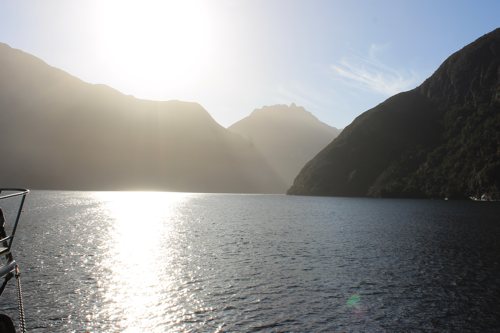 During our return journey through the fjord, a pod of dolphins was spotted near the boat. At first, we could just see the dolphins cresting the water at a distance. In time they swam closer and began to jump out of the water and swim alongside the boat.

Around 12pm we returned to Manapouri. Melissa and I stopped for lunch at a nearby cafe before hitting the road to Dunedin, our next destination. Pronounced doo-need-in, in case you were wondering.

It seems that I've become a little too comfortable with driving here in New Zealand as I was pulled over for speeding! The maximum speed limit is 100kph which is about 62mph. I was ticketed doing 119kph, so about 74mph. Apparently they are pretty strict about the speed limit here since driving 74mph is pretty common in the states. I've had my share of tickets state-side for sure, but none for lower than 80mph on the freeway.

We arrived in Dunedin around late afternoon. The trip took about four or five hours as the city lies on the opposite coast from the Fiordlands. Dunedin is an interesting city with a strong Scottish influence. It's a much larger city than we've visited thus far. Our hotel for the next two nights is the Scenic Hotel near The Octagon, the city's center, so named for it's octagon shape.

Sunday evening is pretty dead in Dunedin, which was a bit nice as it allowed us to quietly explore the area, take pictures, and window shop. We grabbed some dinner at Ratbags where we had a delicious pizza topped with smoked chicken, cranberries, and brie.

After eating we returned to our hotel for the first night where we wouldn't have to wake up at 6am the next morning. I've heard that you're supposed to relax on vaction, too.