We left Queenstown this morning, after our last delicous breakfast at Brown's Boutique. Our destination was Manapouri, a small town on the eastern side of Fiordland National Park. However, Manapouri was just a jumping off point to the big event: an overnight cruise in Doubtful Sound. Doubtful Sound, as we later learned, is so named because Captain Cook was doubtful that he could get his ship back out to sea if he were to harbor there. 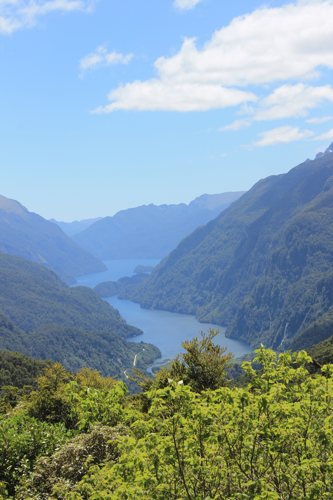 Doubtful Sound is a bit complicated to get at. After a boat ride across Lake Manapouri and a bus ride across some mountains, we arrived in Deep Cove, where our cruise ship, the Fiordland Navigator, was anchored. We had a private cabin which was small, but surprisingly comfortable for a being on a ship. 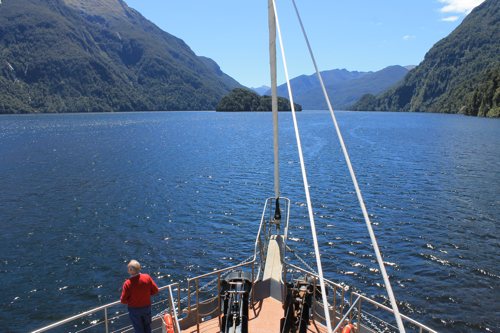 We slowly made our way out to the Tasman sea, stopping at various island and arms around the fjord. In the early afternoon, Melissa and I took a "tinder boat" ride along the coastlines where we learned about the native flora and fauna. 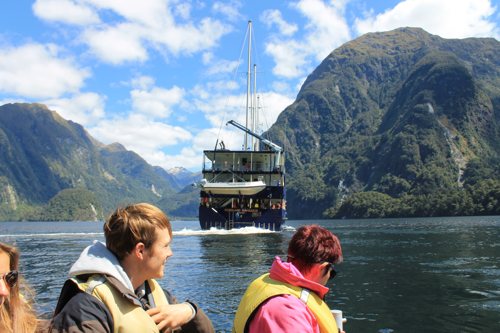 Our trip couldn't have been timed more perfectly. The fjordlands gets a lot of rain (6-9 meters a year, if I recall), however we were treated to blue skies and warm weather throughout the voyage.

We were hoping to catch a glimse of the rare Fiordland Crested Penguin and we got really lucky. A penguin couple were spotted hanging out on some rocks. Melissa was very excited, as she loves penguins! 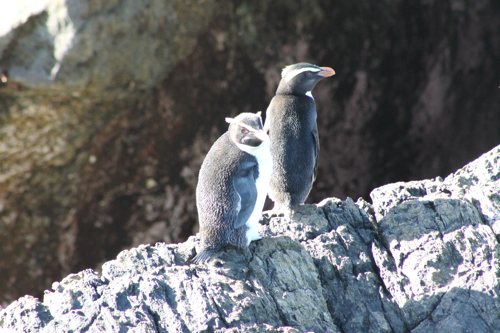 As we got closer to the open waters, we made a stop at an island where New Zealand Fur Seals sleep and sun themselves during the day. 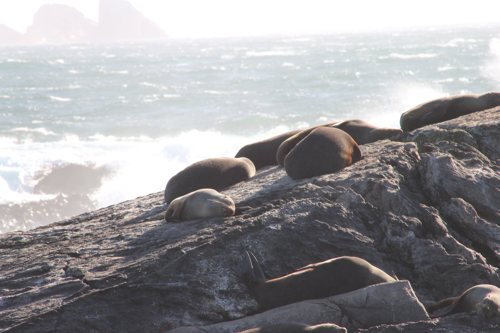 Around dinner time we came back into the calmer waters and were treated to an amazing selection of food in the ship's main saloon. We had lamb, beef, salmon, and lots of great dessert.

We watched a slide show in the evening and then promptly fell asleep after an amazing and tiring day on the water.