Melissa and I are on vacation/honeymoon in New Zealand! We wanted to document our experiences in order to share them with friends and family, as well as help us remember this trip years from now. We'll each be recounting the events of the day in our own words and styles. Enjoy!

Our first day of vacation was quite a bit of traveling. We left from LAX on Dec 8th at 10pm and arrived in Auckland, New Zealand on Dec 10th at 8am. Logging twelve hours on plane is a bit rough. We lucked into an empty seat next to us which made us feel slightly less like a can of sardines. Still, it's hard to get decent rest on a plane. We watched Frozen in flight (as well as a handful of other movies) and learned that it's a pretty bad idea to get engaged on the same day you meet a prince.

When we finally landed in Auckland, we picked up our bags, made our way through customs, and got checked right back in for our flight to Queenstown (located on the southern island). AKL had a sweet archway after disembarking, but we didn't see much of anything outside the airport. 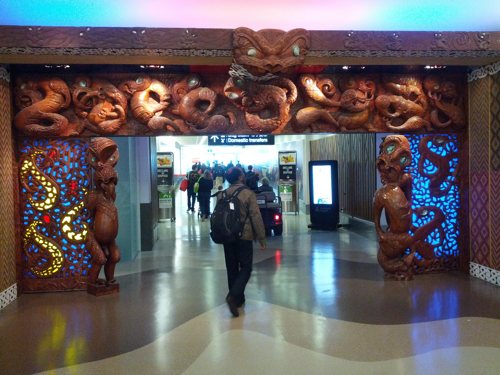 The flight to Queenstown was quite a bit easier. Two hours after already doing twelve is cake. The views from the plane of the snow-covered mountains were spectacular. After we descended through the cloud layer, we were treated to more amazing views of Queenstown and the bay.

Next, we picked up our rental car, a Hyundai Accent. In New Zealand, you drive on the left side of the road AND the steering wheel is on the right side of the car. It's a little tricky at first, but luckily I had previous experience with this driving situation in Tazmania. Melissa was sure that her life was about to end as we made our way from the airport to our hotel.

Our accomodations for next few days is Brown's Boutique Hotel, a pleasant bed and breakfast nestled in the hills of Queenstown. Our third floor balcony offers an excellent view of the city and bay. 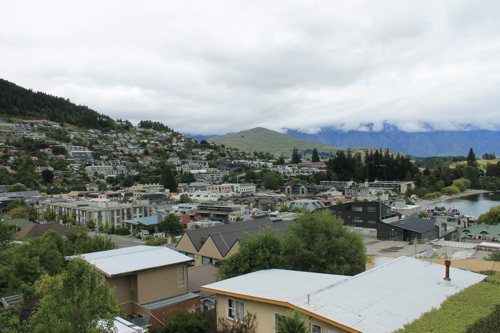 After unloading at the hotel, we walked to downtown and Steamer Wharf. Scarcely had we visited a few shops when hunger pangs and delicious aromas convinced us it was time to eat. Unfortunately, we learned that many restaurants don't open until 4 or 5pm. Our first choice, The Find, was one such establishment but we plan on eating there before we leave Queenstown. We wound up eating at a nice seafood and grill place overlooking the bay.

Window shopping ensued for several hours after dinner as we hunted for souveniers and potential Christmas gifts. Shopping takes its toll and soon we stopped in at Patagonia Chocolate for a HoCho and churros dipped in chocolate. 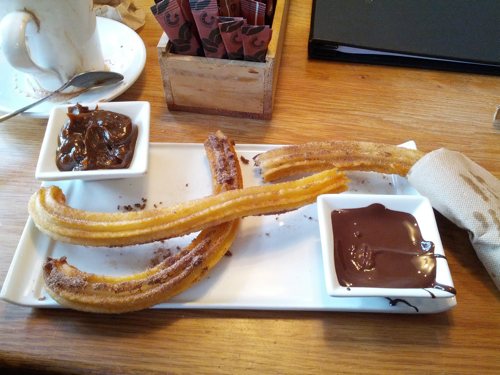 While delicious, the chocolate overload was the last straw in an exhausting 32 hours since we left San Diego. Since we didn't sleep much on the plane and we have an 8:30am tour of scenic LotR locations, we're calling it an early-ish night!

Kia Ora from the future!

Geoff and I time-travelled, sardine-style, and have finally arrived in Kiwi-land! My first impression? It is surreal! Zooming through fluffy clouds to a stunning vista of snow-capped mounts yet lush greenery felt unbelievable. We picked out some islands for the future from afar. 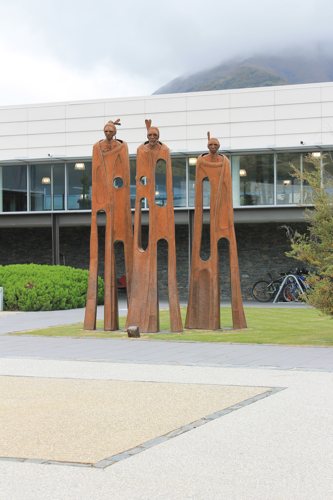 After surviving the baggage claim without Geoff threatening to put me in one for smart-mouthing, we braved the outside, tourist-like, stopping at weird times to take pictures. As we are currently in Queenstown, the adventure capital of NZ, we embarked on the scariest ride of all: Geoff driving on the left side of the road, whilst steering from the right side of the car, traversing numerous traffic circles, all the while telling me to take in the honeymoon, while I yelled "eyes on the road!" Thrilling indeed. Especially, when the windshield wipers suddenly turn on when we needed to turn right or left. Strange. 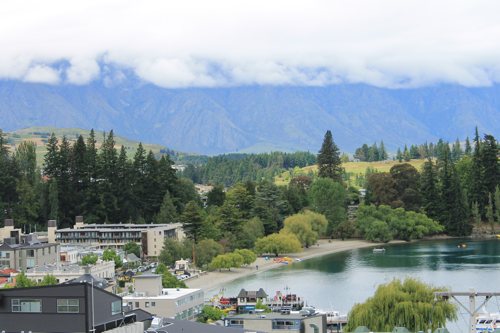 We thankfully arrived at our lodging, unscathed. It is the cutest B&B. Great view of Queenstown from out balcony, french press and tea kettle in our room, and oddly-shaped wall sockets. After a quick freshening up to get the airplane feeling off, we traipsed downtown for some shopping and grub. Downtown felt like a small town version of Fisherman's wharf. A nice pier where people rode shark-like torpedoes, tourist-friendly, and lots of good places to eat! Inevitably, our growling stomachs forced us to settle for one, keeping in mind others for the next meals. We worked off our fish-and-chips and surf-and-turf shopping around for knick-knacks, making mental notes of things to buy before we leave town. When we've made enough room for dessert, we settled on a cute little coffee shop. Honestly, I think Geoff just wanted a reason to call Hot Chocolate his new favorite word: "HoCho." We convinced ourselves we still had more room in our bellies and polished off some churros with melted chocolate and dulce de leche. 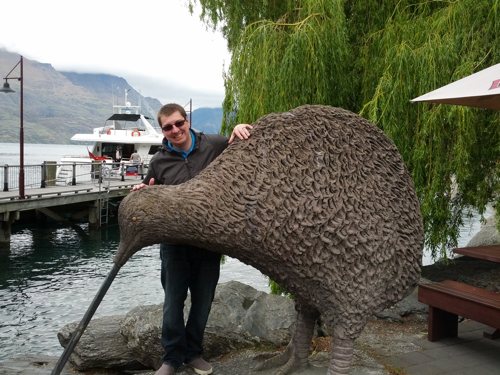