This is a series of posts chronicling our New Zealand trip. For more context, check out the first day.

Today was our first full day in New Zealand. It started off early at 7:30am with breakfast downstairs at the B&B. Melissa and I both had fried eggs with tomatos and bacon. As a big fan of breakfast I have high standards but was not disappointed. Over breakfast we talked with another couple who had booked their vacation through the same travel agent as we did. Small world.

At 8:30am our guide, Andres, came to collect us for a four-wheel drive tour of scenic areas surrounding Queenstown. Quite a few of the locations were used in the Lord of the Rings, and Andres explained how various parts of New Zealand made up a single shot or scene in the movies. 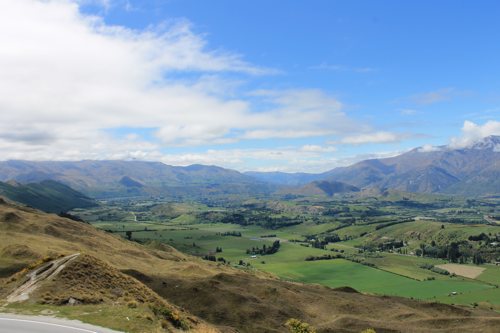 Our first trek was up a small mountain overlooking Queenstown and offering great views of The Remarkables and other peaks. Andres detailed how most of the area was covered in a glacier thousands of years ago, and how various features were carved out as the glacier moved and receeded. Fascinating!

The next destination was along the Kawarau River. Several scenes from LotR were filmed along the this river including Argonath and the battle where Aragorn falls from the cliffs into the river. 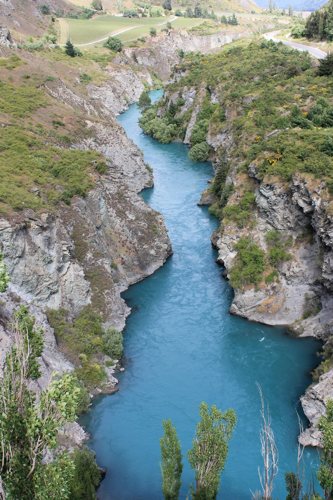 Next, we drove to Arrowtown, a former mining town during the gold rush of the 1860s. We only stayed long enough for a quick pit stop before heading out into the nearby river. It's worth mentioning here that neither Melissa or I had really looked into the details of this tour. Andres had mentioned a couple of times that we'd be driving on a river. In my head, I pictured us driving next to the river. It turned out that he meant in the river!

We stopped at a scenic spot on the river which Melissa immediately recognized as the location of the horse chase through the river scene from Lord of the Rings. Our guide was impressed and I was, once again, out-geeked. 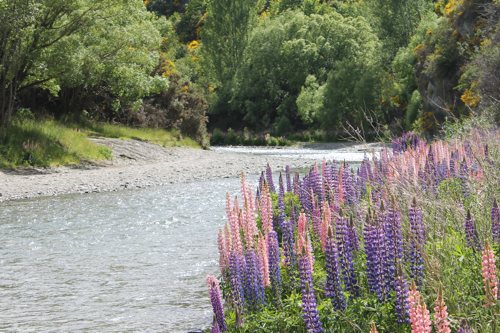 After navigating more of the river, which was up to the windshield at times, we stopped for tea and cookies on the hood of the jeep. Andres joked that our "table" was nice and clean from the river. We learned more about the history of the mining operations, finished our snacks and headed out. 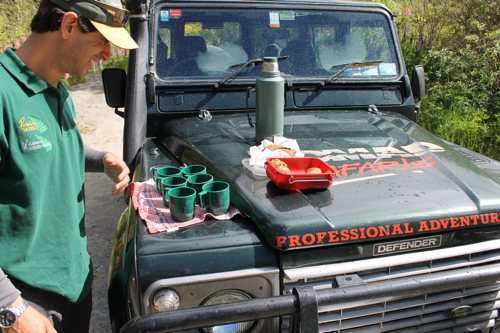 Our final destination was Skippers Canyon. While there weren't any LotR scenes filmed here, the breath-taking views were my favorite of the day. The rock formations and texture of the peaks were amazing. 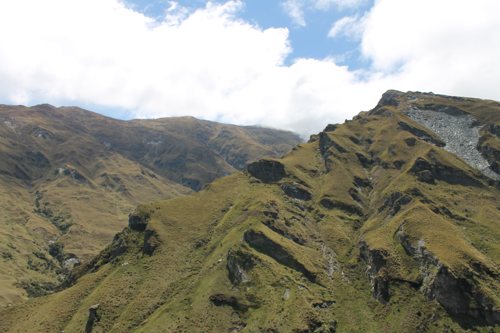 Our tour was over around 1pm and we headed back into Queenstown for some lunch and a walk through the Queenstown Gardens. Light showers and full bellies sent us back to the hotel for naptime in short order, however. 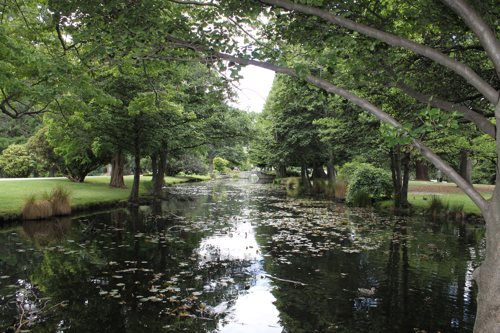 Once recharged we went shopping for gifts in downtown and later grabbed dinner at The Find. I had the Mega Burger, which is the meat-lovers pizza of burgers. Beef, bacon, pulled pork, more bacon. Delicious!

We've got another early morning booking tomorrow so we're off to bed to rest up for a full day of hiking.

Day 2 in Queenstown started off right only snoozing once and promptly getting ready at 6:40 am. Broke our fasts with 2 eggs, 2 pieces of bacon, and a fried tomato cooked by our hosts. Met a colorful couple from Memphis who were on their last day in NZ. We swapped stories and found that they used the same travel agent that we did! They gave us some nice tips from their trip which we greatly appreciated! 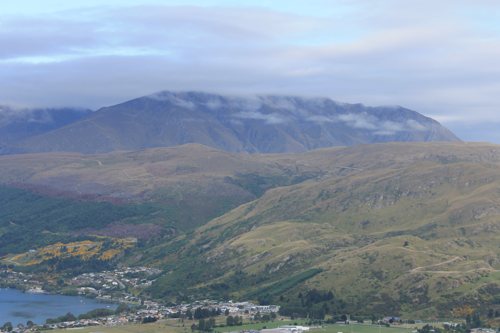 We then embarked on our 4WD tour of Queenstown! We started off going up the aptly named Remarkable Peak. Breathtaking, in more ways than one, considering the switchbacks and hairpin roads. Standing from a cliff of about 1000 meters high, we could see the glacier-carved mountains on every side, some tips covered in fog which Geoff kept calling "the misty mountains" in his most ominous sounding voice. Great views of Lake Wakatipu! 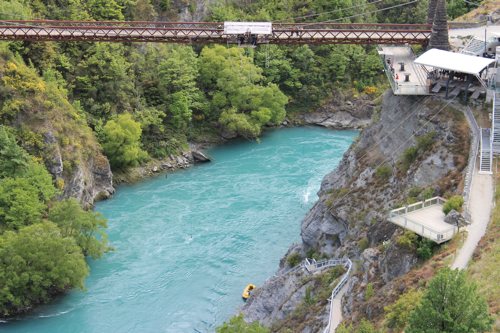 We continued our journey onto another site, just above the cliffs lining Kawarau river. From here we saw the turquoise stream on one side, Lake Hayes on another, a winery, and some brave souls bungy jumping from a bridge! 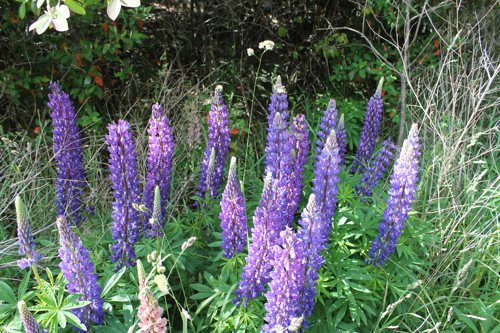 We climbed back in the jeep, drove a few kilometers of purple-weed-lined roads and journeyed back in time again to Arrowtown. This quaint town used to be a mining community during NZ's gold rush and they have preserved this ambiance! They kept the old-timey feeling downtown and even the houses are kept in check by the city to keep in the spirit of its heritage. Here, we also had the best surprise of all: driving on the river bed!!! Yes, the road is a river and the river is a road! Locals drive through here! Quite a bumpy and wet ride but soooooo worth it! We even stopped at a bank and had a picnic. 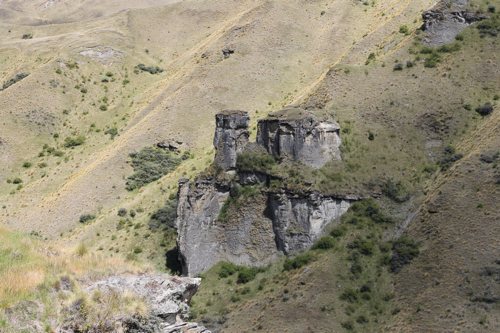 To top off the tour, we finished off on Coronet Peak. From the cliffs we saw down Skipper Canyon where we watched some mountain bikers riding the trails below us and parasailers gliding above us, while we were surrounded by glittery sheet rocks and an upside-down elephant.

And that was all before 1pm! 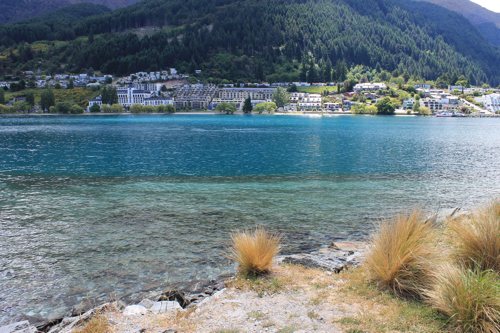 We grabbed a quick lunch from a very mustache-friendly place, Johnny Barr. Geoff had a lamb wrap and I had a mushroom bisque with Ginger Beer. I think that might be my new drink! We tried to walk off our lunch by Lake Wakatipu beach and Queenstown Garden Trail. Unfortunately, it started sprinkling so we decided to go back to our hotel and catnap the dark clouds away.

When the sun came back out at 6ish, we headed downtown again to shop for presents! After looting, we headed to The Find, as Internet-promised. Leave it to us to stumble into a hipster bar. Geoff braved the mega burger, which makes me full just thinking about all the meats piled in it. Bacon was listed thrice on the menu description of it, just to give you a general idea. I was not as brave and was feeling roughage-y, so warm quinoa salad it was! As it had started sprinkling again, we left full and satisfied and climbed the sadistic stairs back to the hotel. 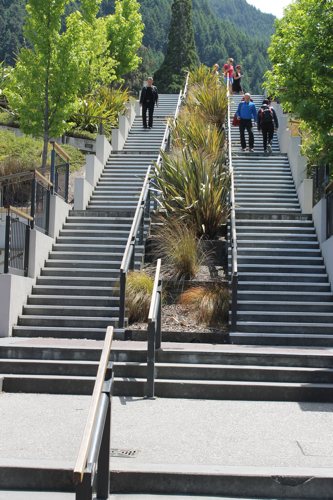 Tonight we are turning in at a more respectable time. Tomorrow, happy sore trails!